Think we’ve been kidding? We’ve talked about this for a very long time. We don’t know whether to be happy that the culprits are now outing themselves, proving us right, or upset that people are ignoring it because they do not understand the implications. 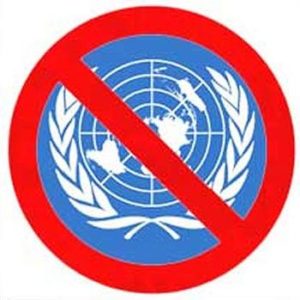 The United Nations is fraught with global socialists. They want to rule the world as your only government. They want to remove borders and national boundaries and adopt a system by which large regional “city-states” are the governing body, including all the towns in the surrounding areas.

This is called “regionalism” and it is generally accepted as a step toward communism, with the least amount of people sitting on appointed boards and commissions making the decisions for the largest amount of people.

The UN has already divided the US into 10 or 11 regions, and each state has already set up an unelected, unaccountable regional government that is directing what is done in the towns. This we have shown you many times over the last 20 years. We have been laughed at and called names but the proof is everywhere.

Groups like the UN, WHO, World Bank, IBO, AARP, APA, and the RPCs are swooping down and directing the content of your “master plans” and running your schools (IBO). The few people who do speak up about it are never heeded.

Elected officials in both the Democratic and Republican party are complicit. Our own governor in New Hampshire is promoting AFFH policies through the “back door” while claiming to fight taxes. The more “study committees” and “commissions” are formed, the more your tax dollars are being used to reward crony capitalists, while raising your taxes and taking away your freedoms. Understand that you DID NOT VOTE FOR THESE RULERS…

These folks basically are attempting to overturn the constitutional republic.

Please keep this website bookmarked and watch the short videos in this article, entitled, “City-State Conversion Planning” for an eye-opening look at what you will need to fight in the future.

If you are too lazy to read the article, watch the videos at least. The first one is a city manager. How dare she!?

Obama spoke about it also, and this is why he instituted the AFFH Act. He said, people who heard about it said “It sounds Soviet”. (They were correct!)

Davis writes about the “Metropolis Project”