It appears the president withdrew the US from the 31-page Paris Climate Agreement.

We say “appears” that he withdrew, because we wonder how much of the global warming agenda, already severely embedded into our federal, state and local governments, would actually be abandoned? Sadly we fear, withdrawal will not have much effect on what goes on currently in your state and town.

The big question is, does this mean the end of our fight against regionalism and the global Agenda 21/2030?

Note: In researching this article, we have looked to websites that are noted for being biased BOTH to the “left” AND the “right” so as not to represent one single perception.

– The goal is to prevent the climate from warming as little as 2º.
– There is no punishment for not following the recommendations as the agreement is voluntary
– It asks richer countries to help out poorer countries

It is interesting to note that those monitoring temperature changes who advocate for these agreements have already been exposed as fudging the numbers on how much warming has actually occurred. We also note that this means nothing more than redistribution of the wealth, based on faulty or inconclusive numbers, and the fact that all warming/cooling depends on human activity when we all know that there have been floods, droughts, melting, and freezing happening NATURALLY long before humans had any influence.

Vox’s writers concluded: “the accord will be weakened, and, much more importantly, so will the fragile international coalition” around climate change.”

So be it. Less wealth transfer to other countries.

The ACLU Tweeted an admission of the true purpose of the climate change hysteria — it’s really nothing more than promotion of ‘social justice’: 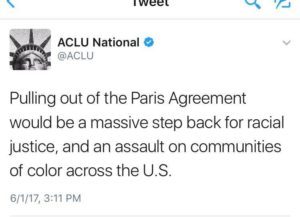 – Although the accord is voluntary, “…courts could theoretically use the Paris Accord to strike down Trump’s attempted rollback of carbon emissions regulations from the Environmental Protection Agency.”

– The U.S. had pledged $3 billion a year to the United Nations’ Green Climate Fund. Under the accord, participants would provide $100 billion to organizations like the Green Climate Fund to provide money to poorer countries to neutralize the costs of curtailing carbon emissions. The Obama administration has already funneled $1 billion to the organization without congressional approval as part of a $3 billion pledge.

Free market activists have said that this will do nothing to help poverty because “Countries that get more government to government aide have lower economic growth rates. Countries with less aid, have higher growth rates. If you subsidize failure you get failure and foreign aid does exactly that. It rewards people for being unsuccessful.”

– The accord was a treaty that never would have been ratified.

This fact boggles the mind. If treaties must be approved by the Senate to become law, the question must be asked, how does any president sign up for such a thing without Senate approval in the first place?

Smart Growth America, a group that pushes ‘sustainable cities’ and regionalism sent this out on June 2:

“Climate change is one of many threats communities are planning for, and strategic choices about land use, transportation, and infrastructure are helping them do it. Building Resilient States: Profiles in Action, a new resource from the Governors’ Institute on Community Design, looks at some of the nation’s best examples of these ideas at work. For more detail, check out last week’s kickoff webinar discussion all about the new resource.”

This new ‘resource advocates consulting with ‘experts’ OUTSIDE state government.

“More than 130 communities passed Complete Streets policies last year—from Americus, GA to Urbandale, IA to Yakima, WA. All of them are in the running to be named the Best Complete Streets Policy of 2016—and the winners will be announced next week!”

Note that SGA’s partners in NH include:

So, this brings us back to the big question: does this mean the end of our fight against regionalism and the global Agenda 21/2030?

It certainly does NOT. In fact it means we must fight harder…

This global agenda of world government and redistribution of the wealth using climate change as the excuse is embedded into local governments. Locals are following state and federal initiatives especially when tax dollars are being dangled in front of them.

Have you noticed the large amount of apartment buildings that have despoiled the landscape in towns like Bedford? These projects are called ‘workforce housing’ when there is no appreciable increase in the workforce, no new companies importing large amounts of jobs. Once again, this is done under the guise of ‘affordable housing’ (in reality, Section 8), and is the result of the social engineering of your neighborhoods under the guise of ‘urbanism’ and ‘sustainability’. Agenda 21 and 2030 are a means to an end, and that is the global redistribution of wealth. The UN views us as “one world”, and that this world should be ruled by one central governing authority, overriding the sovereign governments of individual nations, thus the justification for wealth redistribution. Bogus climate science is being used to take America down.

State Governors and Town Officials must be held accountable for changes made on behalf of this agenda, none of which are ever requested by the people who pay the taxes.

Apparently some Mayors do not know that they cannot sign treaties between cities and nations… and make them stick: 150 Mayors Sign Agreement

And more, proving what we said about dogged adherence to the religion of climate change.

A group of 187 mayors from across the country have joined 10 governors in denouncing President Donald Trump’s decision announced Thursday to withdraw the United States from the landmark Paris Climate Accord.

In fact, these mayors and governors have vowed to ignore Trump’s decision.