IMPORTANT UPDATE TO THIS ARTICLE MADE ON OCTOBER 11, 2017
A NH Republican has been named as New England Regional Administrator of HUD, Boston. Does this now mean yet another Republican is going to help enforce Obama’s unconstitutional policies?

This comes from John Anthony, our friend at Sustainable Freedom Labs.

Is it time for Ben Carson to step down? 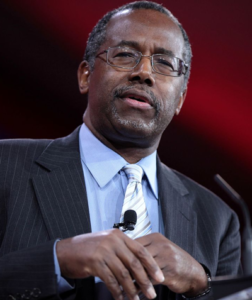 Let me be clear, I like Dr. Ben Carson. I was a supporter of his during the 2016 primaries and appreciated his many books long before he considered running for public office. His story is one of courage and perception. But, since his confirmation as Secretary of Housing and Urban Development, Dr. Carson has unfortunately displayed little courage.

Just because a practice intends to do good, and even does some good, does not mean that it is a healthy long‐term program for most of low‐income families nor for the rest of Americans.

In 2010 Dr. Carson wrote a book about taking risk. “I wanted to send a message to Americans that we’ve become a nation of yellow‐bellies,” he said in an interview. “What we’re buying, and what everyone is selling us, is the promise of security.”

Here was a man capable of showing courage and compassion, exactly the mix of spine and support that low‐income families in America need. Yet, today, Dr. Cason sounds more like the salesman than the risk‐ taker.

HUD policies make heroic attempts to rescue the poor, yet pay scant attention to the limits they place on the futures of low‐income families, nor how the very so-called “sustainable development” policies the agency promotes create new centers of poverty and relocate formerly urban crime into the suburbs.

As urbanist Richard Florida states in his book, The New Urban Crisis,

“Seemingly overnight, the much‐hoped‐for urban revival has turned into a new kind of urban crisis.” The author explains that low‐income families have been financially forced out of the cities, bringing drugs and gangs to terrorize suburban communities. The children of the white upper‐income suburbanites are now flocking to the city centers driving even greater income inequality and lack of affordable housing. Florida, claims “this is much more than a crisis of cities. The New Urban Crisis is the central crisis of our time.”

HUD policies like AFFH with its multitude of requirements, Moving to Opportunity, and Small Area Fair Market Rents, all of which dislocate the poor and force centrally mandated racial (and other) quotas on communities, enact the very policies that contribute to the New Urban Crisis.

I was hopeful after reading Dr. Carson’s 2015 Washington Times article in which he compared HUD’s Affirmatively Furthering Fair Housing rule to busing, a practice he called, “the failed Socialist policies of the 80’s,” that he would end this destructive rule.

Yet AFFH continues its advance. HUD continues to train its staff on policies and procedures to enforce AFFH compliance and determine which communities must receive help, called technical assistance, in implementing the top-down HUD rules.

Part of the “technical assistance” is helping communities complete the Assessment of Fair Housing (AFH) application required to receive the HUD grant funds. Those requirements may include forcing racial quotas on communities that are deemed too white or too affluent, restrictive community land use and zoning laws that must comply with HUD demands, and forcing local planning to be aligned with HUD’s top-down regional data planning, regardless of what people in that community may desire.

Make no mistake, by aligning local and regional planning, local governments are preparing their own jurisdictional subservience. Regions, with their un-elected bureaucratic councils, have the power to override local voters’ decisions, and mandate backyard zoning. Affirmatively Furthering Fair Housing spells the demise of our representative form of government.

Yet, despite this cataclysmic overreach into our local communities and homes – our most sacred space, rather than terminate the AFFH rule, Dr. Carson only agreed to its “reinterpretation.” When a patient has a brain tumor, you do not reinterpret it, Dr. Carson, you excise it.

Though HUD rightfully operates under the umbrella of the Civil Rights and the Fair Housing Acts to protect minority rights, the agency must also consider its impact on all Americans. HUD’s actions affect more than just the poor and protected classes. They affect all of us. Yet HUD fails to consider the large-scale impact of its policies on all areas of society.

For example, In November 2015, HUD introduced the “Equal Access in Accordance With an Individual’s Gender Identity in Community Planning and Development Programs” rule continuing its expansion into the dubious mission of recasting America’s culture.

The Equal Access rule provides transgenders and those who do not identify with their actual birth sex with access to programs, benefits, services, and accommodations in accordance with their chosen gender identity, despite the fact that the scientific evidence for this ideology is weak at best.

To hijack the Fair Housing Act to accommodate individual sexual proclivities undermines the credibility and value of the entire agency. Further, this faddish ruling goes against the values of the Trump administration, Sec. Carson, and the overwhelming bulk of the American electorate that put the administration in office. Yet it continues to be enforced by HUD.

HUD often justifies such programs using friendly research performed by ideologically like-minded firms such as the left-leaning Urban Institute. Yet sadly, these analyses are often devoid of any concern for property rights and local rule, the very DNA of American prosperity, and they often fail to examine whether these programs actually produce the results they purport to achieve, or even worse – if they actually compound the very problems they wish to solve.

For example, when Hanna Rosen wrote her explosive 2008 article in The Atlantic, “American Murder Mystery,” HUD and HUD apologists swarmed to refute her claim that crime followed section 8 voucher users into the suburbs.

Leading scholars claimed that Rosen’s article was a case of “mistaken identity.” That crime did not follow urban families into the suburbs. NYU researchers fired off a census study using “longitudinal, neighborhood‐level crime and voucher utilization data” to defend HUD’s popular program. Yet, numerous studies (here’s one, and another) have confirmed the link between HUD voucher programs and increased crime.

Perhaps Dr. Carson is surrounded by well‐intended apologists who will defend programs like AFFH and Move to Opportunity in the belief that any improvement trumps none. Or maybe the HUD hallways contain more political operatives and establishment types that mislead more than inform. Whatever the cause, Dr. Carson is not forging the changes that will provide a secure net, help the poor out of poverty, and respect the rights of local communities to manage their own affairs.

So where do we go from here? Dr. Carson should immediately: 1) Rescind AFFH, and 2) Rescind the Equal Access rule. Everyone else, contact your representatives and tell them the same.

Dr. Carson, please do not join that “nation of yellow‐bellies.” I respect you and our nation needs leaders who can analyze the problems and make the right calls, no matter how tough nor how unpopular.

Yours in liberty,
John

Note: SFL needs your support for the work they do in uncovering the undermining of our republic. By purchasing their DVDs, you will help them continue their work and obtain the tools to educate others.

“NO CHOICE – How HUD Controls Your Property Rights” is a DVD that explains the most aggressive grab of local authority in our history. It goes unnoticed because many local officials have been safely accepting HUD grants for decades. THE RULES HAVE CHANGED. Affordable housing is now the centerpiece of a federal initiative to move your hometown into a centrally managed region.

The new “No Choice” DVD shows how HUD uses threats of discrimination and civil rights violations to control the economic makeup of neighborhoods, the size of real estate lots and even the number of people per acre.

PLEASE SHARE THIS DVD WITH YOUR NEIGHBORS AND PUBLIC OFFICIALS.

Learn how HUD partnered with the Department of Education to bring socio-economic integration into classrooms and regionalize education. HUD’s new Blueprint for Success draws on the American Planning Association to redesign neighborhoods using the 1968 Civil Rights Act.

The “new” HUD has expanded beyond anything its authors ever imagined.

“No Choice” shows how HUD’s Affordable Housing mandate now includes social and behavioral data to entice children to take on costly college loans. How the agency identifies “areas of opportunity” to move low-income families into affluent areas, even when they prefer to remain in their neighborhoods.

HUD’s power grab is so overwhelming, most find it hard to comprehend. “NO CHOICE” breaks the information down into 10 chapters to make it easy to access and share.

You can receive quantity discounts to help share the information with others.

See our full library of DVD’s to help you learn about and expose HUD, Sustainable Development (False Choice) and planners techniques that sell the enticing benefits of regionalism while ignoring the costly pitfalls. (STAP – Straight Talk About Planning)