Update: There will be a meeting at 6:00 PM on the 26th of January at the Interlakes High School auditorium.

The town of Meredith, NH, where I reside, is considering installing one or more roundabouts in the center of town.

It’s my belief the town Selectmen feel the roundabouts will relieve the heavy traffic that descends on the center of town during the summer months, especially on Friday and Sunday afternoons.

This heavy traffic is created by non full-time residents. Some are tourists and some are people from down south who come to the Lakes Region of NH for the weekends.

I’m a full-time syndicated newspaper columnist and always try to look at facts when it comes to a problem. Let’s consider some facts.

I moved to Meredith, NH in 2008. Prior to that I was a Councilman in Amberley Village, Ohio. A Councilman in OH is the same as a Selectman in NH.

I was chair of the Roads committee in my OH village when I was a Councilman. I’ve chaired meetings with traffic engineers when we were considering a roundabout at the intersection of Ridge Road and the Ronald Reagan Highway in Amberley Village, OH.

When you’re in a small committee meeting like this, the engineers tend to let their hair down especially when the public rarely attends. It’s in situations like this where you get the real lowdown.

The traffic engineers stated in my meetings that ALL ROADS are designed for average or slightly above-average traffic flow. ALL ROADS and intersections WILL BECOME CONGESTED in periods of heavy traffic. That’s a fact.

Here’s an extreme example. Interstate 93 in Concord, NH is just two lanes north and south. Most of the time, it’s rarely backed up with traffic, even on Friday afternoons in rush hour.

But if you travel this road on summer weekends and in October it can become a parking lot as too many people try to use it at the SAME TIME to get north or south.

You could widen the interstate highway to five lanes in each direction to handle this heavy flow, but 99% of the time it would be a waste of real estate and paving material.

Proof of the traffic engineers’ statements is right here in our own state. All you have to do is be at the enormous roundabout on the west side of Portsmouth, NH any morning or afternoon.

In those situations, desperate drivers tend to take chances increasing the likelihood of traffic accidents.

Let’s list some of the most important facts about the proposed Meredith, NH roundabouts:

– Traffic is bad in downtown Meredith, NH on weekends from Memorial Day until Labor Day
– A vast majority of the year, there is rarely bad traffic congestion in Meredith
– Traffic can be bad on weekends during fall foliage season
– Local residents like myself know to AVOID town during peak periods of traffic
– Tourists, who do NOT PAY local real estate taxes to us, are the primary ones that suffer from the congestion

Now let’s consider some facts about the local geography:

– Routes 3 and 25 through Meredith to the Mt. Washington Valley and the northern parts of Lake Winnipesaukee don’t have viable alternative routes.
– People traveling these two routes have to put up with traffic delays no matter what traffic control is in place

Let’s take a look at some of the financial facts about the proposed Meredith roundabouts:

– Most of the money will come from grants obtained from the Federal Government. These grants are legally binding contracts and have long strings attached to them
– The taxpaying citizens of Meredith will pay increased taxes to maintain the roundabouts
– The town of Meredith will lose real estate tax revenue by taking private land and buildings from the tax rolls to create the roundabouts
– The current intersections require routine periodic paving that’s already in budgets
– Sales, food, room and hotel taxes generated by tourists rarely flow back to communities from the state of NH to fund capital projects like roundabouts

Here’s the bottom line if you look at the above facts.

The traffic congestion during periods of peak flow will be the same or worse with the roundabouts.

All you have to have is one or two timid tourists who are NOT FAMILIAR with the merging and aggressive tactics you need to use in periods of HEAVY TRAFFIC to transform one or more approaches into the roundabout into GRIDLOCK.

If you’ve never been parked behind a person afraid to enter a roundabout, you’ll forever remember it when it happens to you. It’s very frustrating as they hold up ALL the traffic behind them.

Aggressive driving increases in roundabouts in periods of heavy flow as impatient drivers force their way into the roundabout.

If there’s an accident in a one-lane roundabout, like the ones proposed for Meredith, the entire intersection becomes GRIDLOCKED. That does not happen in a regular cross intersection as cars can navigate around the accident.

With the current computerized traffic signals at the intersection of Route 3 and 25, traffic flow through the intersections is handled as efficiently as possible. You normally don’t have to wait but a few minutes before your traffic light turns green in your favor.

The roundabouts will NOT relieve the seasonal congestion. Roundabouts do NOT guarantee smooth and consistent traffic flow from all incoming roads in heavy-traffic periods. See above.

Pedestrians wanting to cross Route 3 and Route 25 now have safe crossing signals. It will be VERY DANGEROUS to cross a roundabout on foot and it will bring traffic in the roundabout to a screeching HALT as pedestrians have the right of way in NH – ALWAYS.

One thing is for sure. If the roundabouts are designed like the one just south of the McDonald’s restaurant in Meredith, NH, it will cause even MORE congestion since the diameter of that roundabout is too small. The small diameter allows fewer cars into the roundabout at one time and those in the roundabout travel SLOWLY to navigate the roundabout.

The diameter of the current roundabout in Meredith was designed to CHOKE traffic and slow down cars and trucks. The fancy name used by planners is traffic calming.

These roundabouts are currently being thrust upon communities by those in power who subscribe to planning produced by the United Nations of all places.

Savvy travelers use smart phone and tablet apps to MINIMIZE travel time. There are free apps like Waze and SigAlert that tell a traveler in REAL TIME the BEST alternative route. 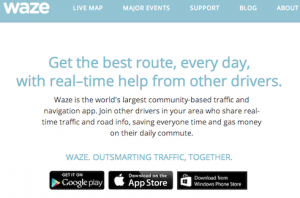 These apps are causing major traffic jams in residential and business districts all over the USA. Don’t believe me? Just go to Bing.com and search for yourself.

What do you think this means for the shortcut down Waukewan Street and Main Street in downtown Meredith? It’s already gridlocked on Fridays in the summer. That gridlock will now spread to other connecting roads through town as the apps will show other secondary routes to be open.

Here’s my prediction. Traffic on Route 3 passing the town docks will be gridlocked by people using the apps who are told to go through town on Main Street. The constant heavy traffic flow passing through town and into the roundabout from the west to continue on Route 25 towards Meredith Neck and points beyond will BLOCK all those people on Route 3 trying to enter the roundabout as they approach it from the south.

Once a line of cars enters the roundabout because there’s no traffic coming in from their left, this flow blocks all the other entrances into the single-lane roundabout. Don’t think for a minute that all the harried tourists or part-time residents are going to be courteous drivers and allow each leg of the roundabout a chance to merge.

You don’t have to be a traffic engineer to understand or imagine this scenario.

Increased traffic on residential and business bypasses in downtown Meredith will lead to:

SUMMARY: The Meredith Roundabouts are not a great idea. They’ll not solve the congestion problems. They may create WORSE secondary problems. They’ll cost the citizens of Meredith MORE MONEY over time. Meredith will have to sign a legally binding contract with the Federal Government and give back all sorts of things in the future to get the money for the project.

Get involved. Contact the Meredith Selectmen and Selectwomen now. Tell them to REJECT the Roundabouts.

Consider asking the Selectmen and Selectwomen these questions:

Why are roundabouts being considered for Meredith, NH?

Can you prove beyond a reasonable doubt that the roundabouts WILL SIGNIFICANTLY relieve traffic congestion? If the answer is “Yes”, can you present that documentation to me?

How will pedestrians safely navigate the roundabout at Route 3 and 25 the main intersection in Meredith?

Can you show me the grant documents from the Federal Government that would fund the roundabouts?

Before you vote to approve the roundabouts, are you willing to go on record that you have you read and you understand ALL of the documents that would be part of a Federal grant to pay for the roundabouts? Most of the grant instruments are hundreds, if not thousands of pages of LEGALLY BINDING CONTRACTS with the Federal Government.

Here are the Meredith Selectmen and Selectwomen that will make the decision:

Tim Carter is one of the most effective leaders the Lakes Region Tea Party has ever had. You can read more of his wisdom here: http://www.timcartersfirepit.com