Today we were stunned to learn that a dear friend and colleague of ours passed away from cancer, so suddenly. The world has lost a hero in Rosa Koire, author of “Behind the Green Mask”. She exposed UN Agenda 21 and Agenda 2030 and the climate change hoax. She understood why the suburbs are under attack and fought the fight in her home state of California. She will be sorely missed. 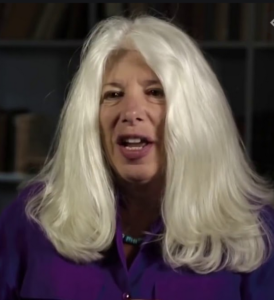 As we’ve always said, climate change is natural, normal and earth’s geologic events have been what was responsible for temperature fluctuations, oceans rising and falling, lakes being created or drying up, and thousands of species having gone extinct.

This continues, despite what man does or doesn’t do.

“For more than 60 years, the National Aeronautics and Space Administration (NASA) has known that changes in weather conditions on the planet are perfectly natural and normal.

But the space agency, for whatever reason, has decided to let the so-called man-made warming scam continue and spread, at the expense of human freedom.

It was in 1958, to be exact, when NASA first noted that changes in the Earth’s solar orbit and changes in the Earth’s inclination were responsible for what climate scientists today call “warming” (or “cooling,” depending on their agenda). In other words, in no way is man warming or cooling the planet by driving internal combustion engine vehicles or eating beef.”

Read more.. NASA admits climate change is natural and caused by the sun

We have followed the late Henry Lamb for a long time and he is still a great resource. Why do we have trouble getting people to understand that low income housing, high density influx, is merely one facet of Agenda 2030?

People think they are going to stop socialism by voting for a ‘conservative’ for president (what a joke that is) but fail to do anything about the socialism that is right under their noses in their own home towns. They would rather argue and post memes about liberals while their own leaders are sending them down the same path.

Please read the article and watch Henry’s video… it’s old, but everything he said has come true and you are seeing it now with towns forced to have bike paths, etc. and the state attempting to tax everything that moves, and most importantly, FORCING TOWNS TO ALLOW HIGH-DENSITY HOUSING.

By interfering with housing, allowing commuter rail plans to go forward, and now discussing the installment of windmills, the NH Governor is doing exactly what Gavin Newsom in California tried doing with SB50 — he is in fact, promoting local Agenda 21/2030.

And You Thought You Were Safe in NH?

Many local groups have awakened to his plans and what they it mean for their towns, but now towns are being attacked from the State level thanks to the Governor and his two Carsey Institute graduates.

In California, the legislature had the brains to NIX Newsom’s bill.

“SB50, which claimed to have addressed the state housing shortage, was a form of bureaucratic overreach that essentially would have stripped local governments’ ability to enact their own zoning laws, consolidating that power in Sacramento.”

NH residents need to get active and let the legislature and the Governor know that this is not the state’s purview to mitigate a phony housing shortage, or to award developers with perks taken from the middle class’ taxes.

Please keep up with all these issues here, bill numbers and other information.

Sununu’s Housing Plan and the push for commuter rail is just part of the “Green New Deal”. So is commuter rail… both being forced upon NH.

These two articles by Edward Ring explain perfectly what we have been saying all along — the high density craze will help destroy the middle class and make single-family home ownership even more difficult.

Currently in NH, the Governor is pushing high-density by promoting two bills that will impose mandates on local boards, and reward developers further for high-density projects.

The taxpayers will take up the slack when services are overburdened and in need of expansion. Not everyone wants to live in a city, or have their rural, semi-rural town be attached to one.

“Most Americans aren’t racist. But they rightly have an aversion to spending their life’s savings to purchase a home in a neighborhood with a certain ambiance, only to then have their taxes increased so people who could never earn enough money to live in their neighborhood come in and live there anyway.”

“Why should anyone work hard their entire life, creating generational wealth, if the neighborhoods where they’ve fought so hard to be able to live are suddenly filled with people who in many cases didn’t have to work at all to live there?”

“On the question of unaffordable housing, however, the opposite is true. Unlike the healthy debate being waged across America on the topic of healthcare, the debate over housing solutions—if one even wants to call it a debate—is decidedly unhealthy. Basic premises go unchallenged. Basic assumptions and options are off the table, considered beyond debate. If the debate over housing policy remains a stunted facsimile of genuine debate, Americans will not only be condemned to purchase barely affordable housing, but their new housing options will be almost exclusively limited to homes on ever-smaller lots—or apartments—in increasingly crowded cities.”

Please read both articles in full for amazing charts and graphs showing statistics and current state of land use in the US.

About the Author of the above articles:

Edward Ring is a senior fellow of the Center for American Greatness. He is a co-founder of the California Policy Center, a free-market think tank based in Southern California, where he served as their first president. He is a prolific writer on the topics of political reform and sustainable economic development. Ring, a fifth-generation Californian, has an undergraduate degree in political science from UC Davis, and an MBA in finance from the University of Southern California.

“Australia is committed to the Agenda 2030 plan, which advocates for the implementation of radical changes to the central role of ownership rights of land and natural resources over the next decade.

Linking this plan, authorities are currently developing a number of smart city initiatives in direct response, promising locations full of ‘sustainable’ programs that monitor a variety of human activities.

Could it be that current bushfires across the country are part of this plan as well? What is the hidden agenda?

In the following, we explore the Australian bushfire ‘crisis’, including the course of events, weather and geoengineering, CLARA’s high-speed train network proposal and links to the UN-driven smart city agenda.”

Australia is no different than the USA where our State Dept is fully committed to Agenda 2030. A permanent ‘smart cities caucus’ has been embedded into our US Congress by a Republican no less!

Everything in this very important article is being DONE, or is being attempted to be done IN THE USA.

THE RISE OF SMART CITIES

“For those who are unaware, the Australian government has committed to a new “Smart Cities Plan”, which sets out the government’s vision for ‘productive and livable cities’ in the near future.

The plan represents a framework for cities policy at the federal level, and it will guide action across various portfolios to deliver ‘sustainable’ outcomes for cities and the people who live in them.

The Smart Cities Plan sets out the Australian government’s vision for our cities, and it includes three pillars: Smart Investment, Smart Policy and Smart Technology.

Please read the full article here to take advantage of all the embedded links.

If you thought it was outrageous that some states have outlawed single-family zoning, you should be horrified at the suggestion that all private property should be outlawed.

In this article from The Nation, the author somehow suggests that rural property owners are ‘unsafe’ and hurting the environment, as if the fires that struck were their fault.

The subtitle of the article states “If we want to keep cities safe in the face of climate change, we need to seriously question the ideal of private homeownership.”

Further their article concludes that somehow, private property ownership is racist or exclusionary.

“If we can reframe debates about the future of cities beyond rote acceptance of property ownership, it will free up space for us to think about new, more just, and climate-attuned modes of urban living. Responding to climate change in just ways entails radically reducing greenhouse gas emissions, protecting against or adapting to climate change impacts, and doing all of it without further marginalizing oppressed groups of people.”

You will note that many years ago when we created this website, we included a quote in the right sidebar from the United Nations, which basically said the same thing — property should only be owned by the government.

“Land… cannot be treated as an ordinary asset, controlled by individuals and subject to the pressures and inefficiencies of the market. Private land ownership is also a principal instrument of accumulation and concentration of wealth and therefore contributes to social injustice; if unchecked, it may become a major obstacle in the planning and implementation of development schemes.
Public control of land use is therefore indispensable….”

Everyone should be concerned, since American delegates supported this policy…

Read more at The Nation

We are at loss to understand what the Governor of NH, a Republican, is thinking with his bi-partisan new plan that would mandate the towns include certain types of housing.

We question if this is even constitutional.

On October 30, 2019, a few days after a “casual lunch” with developers, the Governor announced his plan to mitigate the housing ‘shortage’ in NH. This has serious implications for all NH towns.

To sum up, it would require local boards to train in the language of ‘new urbanism’ by unelected regional planners, and would mandate the inclusion of low-income high-density housing.

It would also give MORE perks to developers which would create incentives to flood NH with high-density housing where it is not wanted or needed.

The only people who can win with this plan is developers. The taxpayers and single-family home owners lose.

The two LSRs associated with the plan have not yet had bill numbers assigned to them but we will keep you apprised as well as contact all State Representatives that they should oppose them vehemently.

Also, we are thankful for Senator Birdsell who has put in an LSR to repeal the Housing Appeals Board and has garnered co-sponsors from both sides of the aisle.

This plan is a blatant manifestation of Agenda 21!

Tom DeWeese speaks to William Jasper of the New American Magazine about the push for Agenda 21 and Agenda 2030, the United Nations’ plan for the reorganization of all of humanity.