In addition to the Tom DeWeese “No Choice” DVD with the lecture from John Anthony that is being loaned out so groups may view, this video of what citizens of Rindge did to protect their town from federal decrees and laws is also very important.

Rindge residents have been at the forefront of fighting major urbanization master plans at their town meetings.

In January and June of 2013, a Rindge resident attended two “visioning” sessions pertaining to a charrette that was held a couple of years earlier. He knew nothing of this charrette before these visioning sessions. Town officials had kept it a pretty good secret, although they insisted everyone was notified. What he learned was horrifying. They were planning on changing zoning in West Rindge Village, and the intersection of routes 119 and 202. What they were proposing was mixed use zoning in these areas. Small little shops on the bottom, and “stack ’em and pack ’em” living spaces on top. These very small “apartments” almost always end up being low income housing. Walking and bike paths. Traffic calming at the intersection. He and his friends did some digging at the town hall and found out the charrette was funded by a HUD grant. As time went on, they would learn just how dangerous this was.

This is when he became involved. He started the group “Save Our Town” and started recruiting help by spreading the word. A newly formed committee started sending out flyers to every household in Rindge. Over 2,200 flyers were sent out alerting the residents on six different occasions. In October of 2013, these activists held an informational meeting with NH State Rep. John Burt and NH State Rep. Jack Flannigan which drew over 200 people. The residents were as surprised as the organizers were when they were told what the town was planning.

Everyone knew now, with all the support, that they had to try and stop this. They canvassed neighborhoods with petitions and got the required amount of signatures to get three articles put on their town warrant for a vote. One article was to remove the charrette results from Rindge’s Master Plan. The second was to remove Rindge’s membership from the South West Reginal Planning Commission, and the last, and probably the most important, was to require voter approval to accept any HUD grants. All three passed at this town meeting by large margins. The removal of the charrette won by a vote of 1082-321. They also got one SOT member elected as selectman, and 2 for the Planning Board.

They are happy to report as of now, it has been pretty quiet in Rindge pertaining to any more major changes. Save Our Town has a committee of about 12 members who take turns attending every Planning Board and Select Board meeting to make sure they do not try to sneak anything else by us. SOT is now a respected group in Rindge, and is often asked to attend certain meetings and hearings to make sure it is what the people of Rindge really want. SOT’s job is to make sure Rindge stays rural. This was a huge lesson that teaches us that you CAN fight city hall and win, you just need to get involved.

The biggest reason to attend town meetings which are coming up in your town soon!

National Review author Stanley Kurtz has mentioned some of our best NH activists in his latest article about Obamazone and the “Affirmatively Fair Housing Act” and the reason why towns should reject HUD grant funds.

To all our volunteers, those mentioned and those not mentioned, your work may be anonymous but it is not going unrecognized.

We haven’t always been able to get the numbers of people to town meetings as we would like. As you might know, in NH, town meetings (running anywhere from January – June each year) is where residents vote up or down on zoning changes. It is less clear how much say they have in these HUD grants, which are facilitated by ‘Regional Planning Commissions’, boards of unelected bureaucrats who operate just outside of public control and with specially selected NGOs. In our case it’s the Carsey Institute of UNH which actually employs a PR firm (NH Listens) and actors to steer public opinion at under advertised, under attended Delphi sessions.

We are grateful that Kurtz has given this issue of regionalism some mainstream attention. We who fight regionalism can no longer to be considered ‘conspiracy theorists’.

Tom DeWeese spoke to the Rindge-Jaffrey-Fitzwilliam Republican Committee about how the group “Save Our Town Rindge” fought back against HUD’s agenda promoted within the ‘master plan’ that had been recommended by the regional planning commission.

If the above video does not appear on your device, use this direct link:
https://youtu.be/jxlkx58SJP0

The Nancy Pelosi video he refers to at the beginning of the talk is available at the bottom of the front page of our main website at http://www.granitestatefutures.org

Tom DeWeese of the American Policy Center will be talking about the dangers of REGIONALISM and Agenda 21 at the Jaffrey-Rindge-Fitzwilliam GOP meeting July 13th, 7:30 PM at the Rindge Meeting House. All are welcome but SPACE IS LIMITED so please RSVP to info@granitestatefutures.org

If the above video does not appear on your device, use this direct link:
https://youtu.be/A_PdRsmZtAY

Come on out and learn about the American Policy Center. Tom is nationally known for his work fighting this “cancer” being pushed by the U.N. 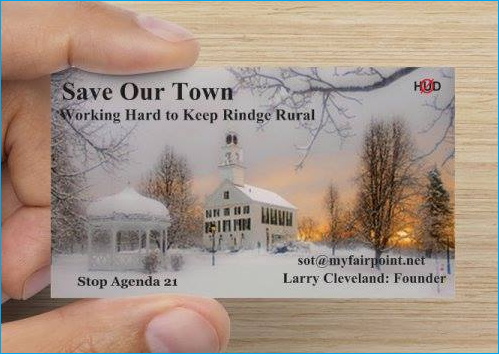 Tom DeWeese from the American Policy Center has been fighting regionalism forever.

He recently featured our own Larry Cleveland from Rindge along with Hal Shurtleff, another warrior for property rights, on his webinar. We connected the two and the rest is history.

Remember, most of these people serve as UNELECTED bureaucrats fueled by federal and local dollars and who are working for the federal government on soviet-style regional commissions, and may have a greater say in what goes on in YOUR town than the average taxpayer. They will work to create “Public-Private Partnerships” taking direction from private interests that may not serve the ideas of the general population.

Notice that the Chamber of Commerce praises the raise in the gas tax.

In Bedford, voters overwhelmingly approved an “overlay district” on River Road, apparently missing the fact that this will only serve to turn Bedford into a city.

“Inward migration” is the key word here, as that is the master plan of the federal government — to get residents to reject rural and suburban living in favor of the car-less, close quarters of the new urbanism’s “compact housing”.

If the above video does not appear on your device, use this direct link:
http://vimeo.com/96273244

Larry Cleveland of Save Our Town Rindge had this to say about an article that appeared in the Ledger Transcript that blamed their group for voting to reject certain federal grants supporting local projects in Rindge, and to cut their relationship with the Southwest Region Planning Commission.

In response to the article: High Speed Internet project at a standstill due to town vote (Karina Barriga Albring, June 18th).
by Larry Cleveland, SOT

First of all, the title itself is misleading. The standstill is caused by the fact that the Fast Roads project in Rindge is complete. Please go to their website and see the press release. It has nothing to do with the “town vote”. They are out of grant money. Selectwoman Oeser keeps saying that the town can’t apply for any grants allowing for more broadband. To the best of my knowledge, there are no more grants available. If there were, don’t you think Fast Roads would be all over them? If there is, please Ms. Oeser, state what they are. I have been to several meetings, and not heard of one. Is this behavior just a tactic to discredit Save Our Town?

The article alleges that Fast Roads brought high speed internet to the Police Department, RMS, and the library. At a recent meeting, the question was asked, “are there any Rindge town buildings connected to this broadband?” The answer was, “no, it’s too expensive.” The fact is this broadband “pipeline” only runs by 467 homes in Rindge. This is less than 25% of residences. Out of those, only 80 have chosen to be connected. This project cost the American taxpayer $2.5 million in Rindge alone. At that rate, with only 80 homes connected because of the high price to connect, and service rates, that amounts to over $31,000 per house. What a bargain. And now they want even more taxpayer dollars to run more lines that won’t be used?

Another untruth in this article is the line “voters decided they didn’t want Rindge officials to receive any (HUD) grants.” Not true. We want to be able to see what they are, and what strings are attached before accepting. After this last round of HUD grants, it was revealed that town officials never read the whole contract, nor did they have legal counsel look at them. As far as “not having the tools” to apply for additional grants, I ask what grants? What tools? Oeser is stated as saying “getting geographic data from the SWRPC is the most convenient approach”. I say, it might be convenient, but there are other resources. It might take a little more work, but isn’t that your job as an elected official? Maybe the real convenience is blaming everything on Save Our Town.

The people of Rindge talk about how they were able to beat back Granite State Future.

If the above video does not appear on your device, use this direct link:
http://youtu.be/eIVNaJYirP0